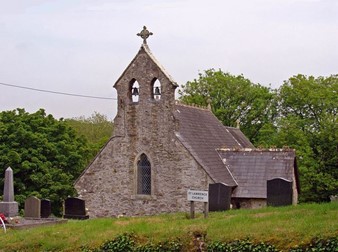 St Lawrence Church is a 12th Century building nestled on the outside of the hamlet of Welsh Hook between Letterston and Hayscastle just across from the Western Cleddau.  It is a grade 2 listed building.

Also built in 1856, was a Rectory for the Vicar which was sold in 1977 and is now a private residence.

The Church also owned some glebe land and some outbuildings one of these was the cowshed and these buildings fell into disrepair.  In 1954 it was decided by the Church Members to apply to the Church Authorities for permission to convert it into a Church Hall.  This request was granted, and the hall was opened on 13th January 1955; a very snowy day.  The hall was extensively renovated in 1999.  The glebe land was also sold to a local farmer in 2005.

St Lawrence Church also had a very successful Sunday School but unfortunately it is no longer functional, but it is a pleasure to see some pupils are still regular members of the Church.

Electricity was first supplied to the Church in 1955.  Prior to that there was a coal stove for the heating and paraffin lamps for lighting.

For many years the Church only had one bell, although it had two bell cotes and when St. Edrens became redundant a faculty was applied to the Church Authorities for permission to remove the bell.  This was granted and the bell was installed in 1990.

A very successful flower festival was held in May 1977, which raised over £3,000, which was spent on renovating the Church interior.

The biggest change remembered in the life of St Lawrence Church was in 2017, when the Greater Dewisland Local Ministry Area was formed.  St Lawrence Church is part of a group of 13 churches in North Pembrokeshire with 2 full time Vicars, Cannon Michael Rowlands and Reverend Diana Hoare, but due to the size of this area, many services are now lay led.